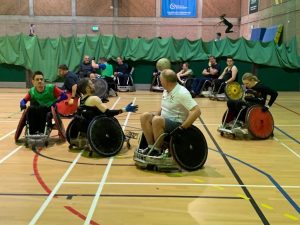 Last night at the Antrim Forum saw an action packed night of wheelchair rugby. Our President, Trevor Ringland had issued a challenge for his select team of rugby veterans to play the Barbarians. He selected a number of rugby legends in an effort to reverse the result of the corresponding fixture last year. And an impressive line up it was. Trevor, Nigel Carr, Keith Crossan, Jan Cunningham, Willie Duncan, Steven Cowan, Philip Rainey.

After a crash course in the rules of the game the challenge commenced. The Barbarians had 11 players in their line up, Trevor’s select 7. A number of games were played with various combinations of players on the court, 4 a side. Unfortunately for the visitors the teams were changed frequently but the results did not. They were consistently outplayed by the Barbarians. As the games continued they were more closely fought. However lack of experience and occasional poor passing let the legends down. Maybe it was the fact they were allowed to pass forward put them off their stride. However as you would expect, they continued to compete strongly right to  the final whistle.

Interviewed after the match, the visitors Coach put the results down to some bad luck and questionable refereeing decisions. He has requested a TMO for the rematch.

The evening was finished with the teams mixed up between visitors and Barbarians. Overall it was a really fun night for everyone concerned. I think there maybe a few sore arms this morning. Many thanks to Trevor and the lads for coming up and giving us a really good work out.